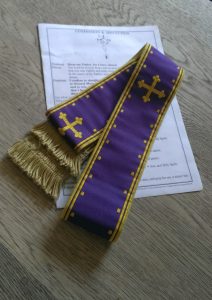 “All may, none must, some should.” (Summary of an Anglican approach to Confession)

The practice of confession and absolution, far from being scary, obscure or unusual, is a normal part of Anglican worship, particularly at the Eucharist but also in the traditional Prayer Book services of Matins and Evensong. In such settings, it begins with the priest making a call to repentance followed a short period of silent reflection. The congregation gathered then says words of confession together, and the priest finally pronounces God’s forgiveness while making the sign of the cross.

Alongside such corporate confession, there is also the Sacrament of Reconcilation or private confession, which is also practised in the Anglican Church, especially in the Anglo-Catholic tradition our parish stands in. Many people observe a discipline of making their confession before major Feasts each year such as Easter and Christmas, or even more regularly through the year, e.g. about once every six weeks.

Here at Cowley St John, the Sacrament of Reconciliation is available by appointment with one of our priests. If you have not made your confession privately before, and would like to find out about what it involves, do get in touch with Fr Phil, our vicar.