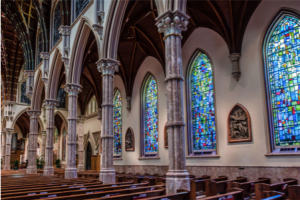 The Via Dolorosa (‘sorrowful way’) is a route through the streets of Jerusalem which, by tradition, traces the path Our Lord walked, bearing his cross, from the place of his condemnation to the place of his crucifixion, entombment, and resurrection. It is uncertain at what point in late antiquity this route became a place of devotion.

What is more certain is the revival of devotion on the Via Dolorosa in the early 13th century, when the Franciscans began caring for the pilgrim sites in the Holy Land. Later, an English pilgrim, William Wey, who visited Jerusalem in the middle of the 15th century, wrote of ‘stations’ along the way where pilgrims would halt, meditate, and pray.

Because most Christians were unable to make pilgrimage to the Holy Land, it became the custom in Western Europe to erect replica ‘stations’, first outdoors and later inside churches, which the faithful could use as routes for meditation and prayer. Prior to the Reformation most English Christians had access to local Stations of the Cross.

Although the devotion fell into desuetude in the immediate post-Reformation period, it was revived in the Church of England in the 19th century and became once more a practice, enjoyed especially in Lent, by which Anglicans could enter into the passion of Our Lord in a prayerful, formal, and liturgical way.

Although at first the number of stations and scenes varied from place to place and over the centuries, in course of time the following fourteen scenes (reading from left to right, upper row first) from the Passion of Our Lord came to be almost universal throughout Christendom:

The Parish of Cowley St John enjoys two sets of Stations: one in traditional Victorian imagery (at St Mary & St John) and one by the important 20th century artist Eric Gill (at St Alban’s Church).