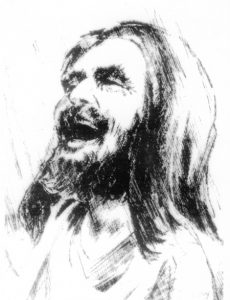 Sermon preached by Fr James Koester SSJE on Philippians 2.1-18, the fourth of a sermon series reflecting on the nature and purpose of the Church through St Paul’s letters to the first Christian communities.

I want first of all to express my gratitude for the invitation for us to be here today. As you know my brothers and I are members of the Society of Saint John the Evangelist, known better here as the Cowley Fathers, so it is a delight to be here in Cowley, the parish where it all began.

We have been on pilgrimage to celebrate the 150th anniversary of our founding, as we have explored the roots of Christianity, and thus Anglicanism in this land, but also discovering our own roots as an Anglican monastic community and especially as a particular monastic community that had its origins in this neighbourhood.

One of our customs at the Monastery is to read the obituary at Compline of a brother on the anniversary of his death. So over the years we have read about the small house on the Iffley Road where Fathers Benson, Grafton and O’Neill began the life of our community, and now we have seen, what is known to you as the Isis Hotel, the very house in whose parlor chapel those first three Fathers made their professions on 27th December 1866, the Feast of St. John the Evangelist, and thus began the life of our community. We read about the chapel at the top of the stairs where Father Benson’s teaching to the early members of our community acted as the crucible where our community’s life took shape, and now we have celebrated the Eucharist there and explored the rest of the old Mission House, now St. Stephen’s House. We have seen, and even touched, the names of departed brothers inscribed on the walls of the Mission House Lady Chapel, including many of those whom we have known and loved over the years in our Monastery in Massachusetts. We have met and stayed with the All Saints Sisters and the Sisters of the Love of God, whose histories are so tied up with our own. And some of us, having heard about the Gladiator Club, founded after the Second World War by Father Hemming, have now been to the Gladiator Club and met some of its members, had a drink, and watched a couple of rounds of Aunt Sally. We have prayed in the cell in the Mission House where Father Benson died and stood outside this Church by his memorial cross. And today we are here, in the heart of the Parish of Cowley St. John, with you, who are no less the daughters and sons of Father Benson than we are.

We fly back to Boston tomorrow morning with hearts and minds full of memories and images of our pilgrimage. I will remember celebrating the Eucharist in a small side chapel at Canterbury Cathedral being watched by tourists and pilgrims as they made their way to the site of Becket’s Shrine. I will remember shedding a few tears as I preached in the Founder’s Chapel in the old Mission House, where Father Benson himself preached so many years ago. I will remember processing around Norwich Cathedral on the Eve of the Feast of Saint Mary the Virgin singing the hymn Sing We of the Blessed Mother, and ending up by the statue of Our Lady of Pity listening to the choir sing Ave Maria. And now I will remember preaching from the pulpit in this Church where Father Benson must have preached. But most of all, I’ll remember laughing.

It’s a little embarrassing to admit that we travelled 1000’s of miles by airplane and train and coach and ferry to see, and be, and pray in various places and what I am taking home with me is memories of laughter. Yet laughter, at least when you laugh with and not at someone, is a sign that something important it happening. It is, I think, I sign of friendship. As Paul writes in Galatians, laughter is for me a sign of love, joy, peace, patience, kindness, gentleness, and self-control.1

We say in our Rule of Life that for us no honor exists that could be greater than Jesus calling us his friends. The more we enter into the fullness of our friendship with him, the more he will move us to be friends for one another, and to cherish friendship itself as a means of grace. The forging of bonds between us that would make us ready to lay down our lives for one another is a powerful witness to the reality of our risen life in Christ. In an alienating world, where so many are frustrated and wounded in their quest for intimacy, we can bear life-giving testimony to the graces of friendship as men who know by experience its demands, its limitations and its rewards.2

It is this, I think, that Paul hints at in the Letter to the Philippians when he writes: be of the same mind, having the same love, being in full accord and of one mind. Do nothing from selfish ambition or conceit, but in humility regard others as better than yourself. Let each of you look not to your own interests, but the interests of others. Let the same mind be in you that was in Christ Jesus….3 Here Paul is inviting people into a bond of deep mutual friendship marked by love, unity and humility. Echoes of this kind of mutual friendship are heard in that great hymn of love in the First Letter to the Corinthians: Love is patient; love is kind; love is not envious or boastful or arrogant or rude. It does not insist on its own way; it is not irritable or resentful; it does not rejoice in wrongdoing, but rejoices in the truth. It bears all things, believes all things, hopes all things, endures all things. Love never ends.4

It is this patient, kind, enduring friendship that was manifested by the One who has called us friends,5 who has laid down his life for us6 and who invites us to lay down our lives for one another7 and who though he was in the form of God, did not regard equality with God as something to be exploited, but emptied himself, taking the form of a slave, being born in human likeness. And being found in human form, he humbled himself and became obedient to the point of death— even death on a cross.8

The quality of our friendship is defined, not by the click of a button, but by our willingness to die, and that begins, I think with laughter. And that is what I find astonishing! Not only was Jesus willing to die for his friends, but after the resurrection, that company of terrified women and men were willing to die because of what they had seen and heard. As we read in the First Epistle of John: We declare to you what was from the beginning, what we have heard, what we have seen with our eyes, what we have looked at and touched with our hands, concerning the word of life—this life was revealed, and we have seen it and testify to it, and declare to you the eternal life that was with the Father and was revealed to us—we declare to you what we have seen and heard so that you also may have fellowship with us; and truly our fellowship is with the Father and with his Son Jesus Christ. We are writing these things so that our* joy may be complete.9

Something happened to that band of women and men and it began not with threats, or fear, or terror, but with laughter. Again we say in our Rule of Life: Jesus chose to work the first of his signs and reveal his glory at the wedding feast at Cana, and he was the chief guest at many meals held to celebrate the new life he was bringing through the gospel. His joy will abound in us when we celebrate by feasting on the holy days that commemorate the great acts of creation and redemption, and the glories of the saints. He will continue to reveal his glory among us on the joyful occasions when we have festal meals to mark professions, clothings, anniversaries, holidays and special turning points in our life. These feasts are another expression of our eucharistic life, and anticipate the heavenly banquet which the risen Lord is preparing for those who love him. The careful preparations that make our festivities so pleasing are sacred tasks. Our ministry of hospitality finds one of its richest expressions as we welcome guests to join us in these festal liturgies and meals of celebration.10

Something happened all those years ago when the first disciples headed off in all directions to proclaim the Good News of the Resurrection. Those early Christians had discovered what true friendship meant because they had seen it in the life, death and resurrection of Jesus and it began, not cowering behind locked doors in the Upper Room, but laughing around dinner tables, astonished by the unexpected quality of the wine, 11 speechless at the audacity of the host’s guest list,12 and stunned into silence watching their teacher was their feet.13

Something has happened to me over the last three weeks. I have been astonished at unexpected tears in small chapels. I have been made speechless by the incredible generosity of our hosts. I have been stunned into silence as I have become aware of the presence of God. And I have laughed.

Friendship is marked, not by the click of a button, but by our ability to laugh. Though the Gospels don’t tell us, I am sure that Jesus laughed, and having laughed, he was willing to give up his life for his friends.

Friendship is marked, not by the click of a button, but by our ability to laugh. Though the epistles of Paul don’t tells us, I am sure that Paul laughed, and having laughed, he was willing to give up his life for his friends.

Friendship is marked, not by the click of a button, but by our ability to laugh. And I have laughed this past three weeks, and having laughed I go home, not just as a pilgrim, but I hope a better friend and all that that means.

2 SSJE, Rule of Life, The Graces of Friendship, chapter 42

10 SSJE, Rule of Life, The Rhythm of Feast and Fast, chapter 28