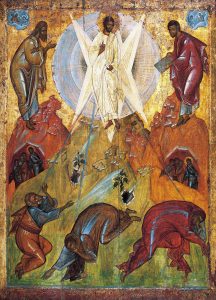 Sermon preached at St Mary and St John on the Feast of the Transfiguration by the Revd Katherine Price, Chaplain of Queen’s College, Oxford.

Since they had stayed awake, they saw his glory.
+ In the name of the Father, and of the Son, and of the Holy Spirit. Amen.

I’d like to share a memory with you. When I was little I too used to climb up into a marvellous world to see wonders… not up a sacred mountain but just up the ladder into the loft space in our house! Of course the loft was full of junk but when you’re that age nothing is junk: an empty toilet roll isn’t something that’s served its purpose and needs to be thrown away but just a rocket or a dragon that hasn’t happened yet.

Up in the loft I had my little den, for making up stories. And my dad had his for his inventions. And if I was careful he would let me play with the oscilloscope… Don’t worry, I have no idea what it does either! To this day – it’s just a thing with knobs and switches and wiggly lines. This was before kids had ipads… It was years before I realised this isn’t one of those cute childhood memories everybody has!

And pinned up on one of the beams my dad had put a quote from T E Lawrence – the hero of the film Lawrence of Arabia and it read “the dreamers of the day are dangerous men”.

The dreamers of the day… Daydreaming isn’t generally seen as something very productive. When we call someone a bit of a daydreamer we’re saying they’re not in touch with the real world.

But it seems to me we have some funny ideas about reality. We have this way sometimes of talking about ‘real life’
as if perhaps our lives here in Oxford are less ‘real’ than they might be in somewhere that doesn’t feature in Morse and Harry Potter! Or as if a conversation on facebook or by text hasn’t happened ‘in real life’…

Today’s passage from the Gospel of Luke is an account of what could be a kind of dream-like state. We hear that the disciples were very sleepy but they had stayed awake or an alternative translation reads they had ‘become fully awake’.
They’re on the edge of sleeping and waking. And there are features of this story which remind us of dreams: for instance, Jesus’ face changed – but they aren’t able to describe how. And then Moses and Elijah are somehow there. Have they been there all along? But Peter somehow knows who they are and he just takes it in his stride, the way you do in a dream.

Now when I say this is like a dream I am not at all suggesting that it is not something real. Our Old Testament reading today from Daniel is also a dream: Daniel says he saw this while he was asleep. People at the time of Jesus took dreams very seriously; I suppose since Freud we’ve started taking dreams seriously again, in a different way: but we’ve all had that experience of a dream helping us to see things differently and perhaps waking up and realising we have an answer or a solution to something that was bugging us the night before.

The disciples see reality more clearly, not less. They see the real truth about Jesus’ divinity. They’re not seeing something that isn’t there but seeing what is there, differently.

That’s what I love about icons, like the one on the front of your pew sheet today. They are pictures of real people and places: – You won’t find an icon which shows Jesus with blonde hair and blue eyes or the Angel Gabriel visiting Mary in an Italian city – But as we might imagine they really are in the eyes of God. They are a reminder that heaven is not ‘somewhere else’. It’s here.

And it’s not just religious images that can do this. It’s all kinds of art and creativity: painting, poetry, photography. A photographer or a poet isn’t oblivious to the real world on the contrary, they are very attentive to what is actually there
they draw our attention to what we might overlook the beauty of the sky reflected in a puddle or the sparkle in the eye of an old man on a park bench. And you don’t have to be a professional artist: if you’ve ever used one of those photo filters online, like instagram or prisma – This is where you take an ordinary photo and turns it into something that looks like it’s been painted. Suddenly we see our lives and the people around us as worthy of art. We see what is there, differently. And we see its potential.

There’s this fashion at the moment for ‘upcycling’ – for making something new and beautiful out of junk. Or there’s that graffiti art just here next to the church: taking something we often think of as destructive, as vandalism and instead making it creative. There’s that phrase isn’t there, “when life gives you lemons, make lemonade”… I saw a really beautiful and humbling example of this the other day that was reported as part of the commemoration of fifty years since the decriminalisation of gay relationships: there is a man who goes around planting and photographing pansies at the places where homophobic attacks have happened. He has taken something which you would think was entirely negative and he’s found a way of making it into an excuse for beauty.

The Transfiguration, this event on the mountain, occurs as Jesus is on his way to his ultimate appointment with death –
an agonising and humiliating death and yet he talks about his ‘departure’ as something to be accomplished or fulfilled
a creative action. As a society, we are not good with suffering. We treat pain and misery as something simply to be blocked out. We feel bad about feeling bad!

Jesus needs his disciples to see him as he really is so that when they see him on the cross  there will be no doubt in their minds that he has not only dignity but glory and so that when they see other people suffering and neglected and despised they will look for beauty and glory in them too.

But he’s also teaching us something about prayer. These words from the cloud, “This is my son.” We’ve heard them before: after Jesus’ baptism in the river Jordan and again in St Luke that happens again when he is praying. We tend to think of prayer as a very private thing, but Jesus has invited his friends to be there to watch and learn.

Prayer often looks a bit like daydreaming. In fact, when I wander around the beautiful footpaths on the Kidneys here
or in an art gallery I’m sometimes hard pressed to say, am I daydreaming or praying? Either way, it’s not withdrawing from the real world. It is training ourselves to look at the world in all its ugliness and see it in all its glory.